How is EasyNDA different from services like DocuSign and EchoSign?

EasyNDA is a dedicated NDA platform

EasyNDA is a dedicated NDA management platform. NDAs, seemingly of small importance, are a very, very, important part of any merger or acquisition. If your NDAs are not in order, employees have left the company carrying with them NDAs your company has signed, or existing employees have scattered hard and soft copies of NDA throughout your various personal and enterprise filing systems, you're in trouble. EasyNDA puts all your NDAs at your fingertips - in one location, easily accessible, and ready when you need them.

Document signing services like DocuSign, EchoSign, and many others, make it possible for you to manually create an electronically signable form - and that's it - a very small part in your NDA management needs. EasyNDA is the complete solution performing the heavy lifting you need well beyond signing the document.

A non-disclosure agreement, or NDA, is an agreement between two parties not to disclose information exchanged between the two parties to any other party. Normally NDAs are good for a limited period of time called the "term of the agreement" which is most often two years but can be any period of time appropriate for the parties and information exchanged. Other common terms are three and five years.

There are a few standard elements to NDAs, and a few elements that can be negotiated for complex transactions like mergers and acquisitions. EasyNDA is designed for every-day use. The elements of the "every day" NDA cover most cases leaving only a few cases where a negotiated, special-purpose NDA can be required.

3. Mutual and one-way NDAs - How do they differ?

Most commonly, NDAs are "mutual" - both parties agree not to disclose the information exchanged. A mutual agreement makes great sense since in almost every situation the two parties have a mutual interest in constraining confidential information.

There is a logical argument that one-way NDAs offer no real benefit over MNDAs since, even in the case of a one-way transmission of information from Party A to Party B, Party A's inclusion in an agreement not to disclose information from Party B (where no information is actually provided) are the "sleeves off the vest" of Party A yet provide a simple layer of protection to Party B should there be a subsequent communication exchange over the information. Starting with and MNDA covers the one-way case while also saving time and trouble by inherently covering future information exchanges in both directions.

4. What makes an NDA a contract?

An NDA is a contract in which the parties promise to protect the confidentiality of secret information that is disclosed during employment or another type of business transaction.

5. Is an EasyNDA a contract?

Yes. It is a contract because the two parties are voluntarily agreeing to create a mutual and legal obligation to exchange consideration.

Proprietary information in this agreement is defined as information that the receiving party knows or has reason to know is confidential because it was identified as such verbally or in writing, or because of the nature of the information and context in which it was disclosed. Some information, such as strategy and pricing, is always considered proprietary.

The agreement itself is proprietary.

The agreement also covers affiliates of both parties and requires affiliates to have agreed in writing to comply with the parent parties’ obligations of confidentiality.

There are three stock purposes provided in the form. Together, they cover most situations; however, there are conditions under which a narrower purpose is desired, or one that is not covered by the three broad purposes. In that case, a custom purpose may be inserted.

The standard purposes are:

The agreement goes into effect on the Effective Date – that date on or before which proprietary information is first exchanged – and continues until the agreement is terminated.

The term of the agreement extends the obligations of confidentiality beyond the date the agreement is terminated by the length of the term.

Example: Your agreement has a two-year term and an effective date of 1/1/00. Four years later, on 1/1/04, you terminate the agreement. Your mutual obligation of confidentiality extends to 1/1/06.

Regardless of whether the agreement has been terminated or not, the responsibilities of confidentiality apply to both parties for the period of the term beyond the date on which proprietary information was disclosed.

Excluded from protection under the agreement is information that was previously known, is independently developed, received from third parties, etc.

Also excluded from the agreement are both employees, and employees’ knowledge that is improved in the fields of the other party’s proprietary information.

Finally, this section makes it clear the agreement does not constitute an engagement for service or a business arrangement.

The receiving party has no rights to the disclosed information except those rights needed for the purpose of the agreement.

Here both parties confirm they have the right to make the disclosures, and at the same time, disclaim all other warranties or representations to the disclosed information.

The parties make no guarantees ('warranties') to the accuracy of any disclosed information.

It only takes one day’s notice to terminate the agreement. Do so in writing to the address on the agreement. Obligations of confidentiality apply only to information exchanged before termination, but extend for the full term of the agreement past the date of termination or disclosure whichever is sooner.

"Jurisdiction refers to where a dispute will be resolved; governing law indicates which state's law will be used to decide the dispute. It's possible, for example, for a contract to require lawsuits to be filed in California but decided under New York law. The selection of which state is used for governing law is not often a crucial negotiating issue. But the selection of the state for jurisdiction can be more important: If there's a dispute, that's where everyone will have to go to resolve it. Sometimes these two provisions are grouped into one paragraph." Choice of Law Provisions in Contracts. Nolo Press

A faxed or e-mailed (fully executed) agreement is binding. The agreement does not have to be printed and mailed.

Both parties acknowledge that they each have had time and opportunity to have the agreement reviewed and negotiated by an attorney.

The Notices clause specifies (a) the from of notice, (b) how notice may be made, and (c) when a notice will be deemed to have been received.

What are electronic signatures? 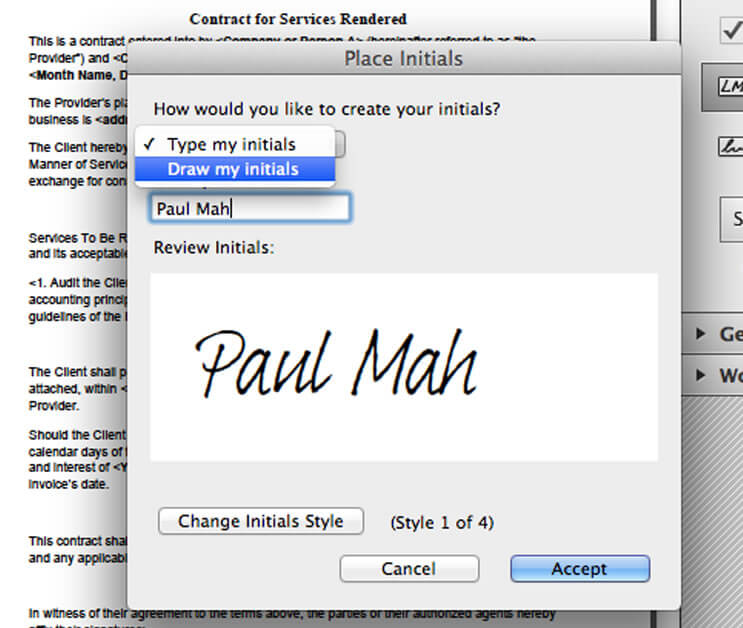 Electronic signatures (not to be confused with digital signatures which require private and public key cryptography) have been accepted into law in most countries. In the United States, the definition of what qualifies as an electronic signature is wide and is set out in the Uniform Electronic Transactions Act ("UETA") released by the National Conference of Commissioners on Uniform State Laws (NCCUSL) in 1999. It was influenced by ABA committee white papers and the uniform law promulgated by NCCUSL. Under UETA, the term means "an electronic sound, symbol, or process, attached to or logically associated with a record and executed or adopted by a person with the intent to sign the record."

Laws around the globe

Various laws have been passed around the world to facilitate commerce by the use of electronic signatures:

A great snapshot of the best practices for deploying electronic signatures worldwide is maintained here by Adobe EchoSign:

UETA Sec 2 definitions
(5) "Electronic" means relating to technology having electrical, digital, magnetic, wireless, optical, electromagnetic, or similar capabilities.
(6) "Electronic agent" means a computer program or an electronic or other automated means used independently to initiate an action or respond to electronic records or performances in whole or in part, without review or action by an individual.
(7) "Electronic record" means a record created, generated, sent, communicated, received, or stored by electronic means.
(8) "Electronic signature" means an electronic sound, symbol, or process attached to or logically associated with a record and executed or adopted by a person with the intent to sign the record.

If the email address you enter matches one in our system,we'll send you a password reset link.